Lots on offer for large crowd at Boxing Night Speedway 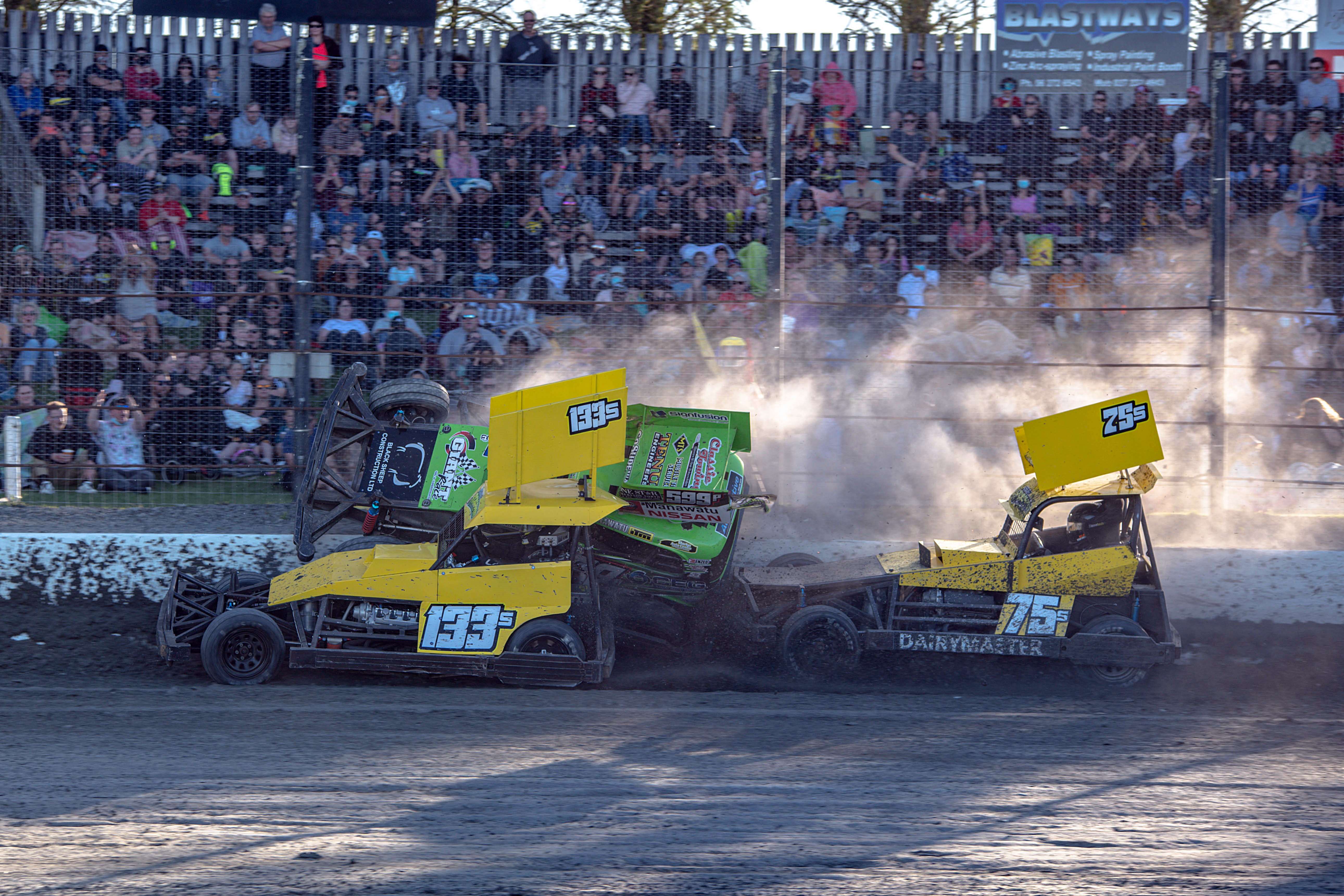 Photo: Tyler Walker (113) and Carl Shearer (75) work together to put Manawatu Mustangs driver Ron Tye into the wall during the Superstocks team event.

With three Taranaki titles on the line, two Superstock teams races and a Demolition Derby, there was plenty on offer to entertain the large crowd that arrived at MG Taranaki Stratford Speedway for the Dairymaster sponsored Boxing Night race meeting.

Nine Modifieds were on hand to contest the FieldTorque Taranaki champs and the Gigne Hayward Memorial, including Huntly visitor Syd Ferguson and Auckland racer Daniel Crumpe.  After three fast paced races where Jason Kalin recorded a win and two third places and Carl Hinton recorded a second, fourth and first, the pair were tied on points for the FieldTorque Taranaki Modified champs.  A four lap run off was required to determine the winner and after an initial false start, Carl Hinton keep his foot firmly pressed down on the accelerator pedal on the restart to run deep through turns one and two and drive around Kalin before staying in front for the four laps to win the Championship.  Ferguson drove the wheels off his car all night to come home in third place.  The Ginge Hayward Memorial was a one race affair, with a reverse grid start of the finishing order of the Taranaki Champs.  Shaun Bloeman kept his nose clean to win this race ahead of Ferguson and Kalin.

Sixteen Minisprints from Stratford, Whanganui and Palmertson North contested the Zodiac Signs Taranaki Champs.  Close and even racing in the class saw race wins shared between Daniel Nickel, Cory Ward and Karl Uhlenberg but it was Uhlenberg who was the most consistent driver and won the Championship by a one point margin from Ward.  Cameron Hurley, who usually finds himself finishing fifth in most events, made a vast improvement forward and came home third.  The championship didn’t go so well for Mason Ward who was making his debut in the class and lasted barely a lap before impressivley flipping his car end for end in front of the grandstand.

Racing for the second time this season, the Midgets were racing for their Taranki Champs too.  A decent grid of twelve cars were present with a different format utilised to the Modifieds and Minisprints.  Rather than three heats, the drivers raced twice, with their points accrued then determining their starting position in the one race final.  Duane Hickman and Greg Jones were both very quick around the oval with a win apiece in the qualifying heats.  The final saw Hickman start from grid two and Jones from grid one.  The first attempt to start the race saw Jones tuck his car down low while Hickman ran wide, with Jones taking comand of the lead.  However, a caution for a racing incident saw a restart to the race and on the restart Hickman went a little quicker and deeper into the turn and grabbed the lead before the completion of the first lap.  He stayed at the front for the duration of the fiften lap race to win the Championship ahead of Jones and Whanganui racer Ben Huijs who made great progress through the field, especially in the later stages of the race, to come home third.

The Stratford Scrappers Superstock team lined up against the Manawatu Mustangs for two teams races and they were good teams races with some huge hits.  Tyler Walker was protected on track by his team mates to win the first race for the home town team and the Scrappers looked like they were going to win race two as well when Blayke Adamson had a commanding lead.  However, steering failure with just one lap to go saw Adamson stuck on the infield and the Mustangs were able to claw back the two laps they were behind to win race two.

Youth Ministocks and Stockcars raced on the night also with the Youth races being won by Bronson Pierce, Cory Symes and Corban Swan.  Ryan Nolly won his first ever race in the Stockcar class before his car expired meters from collecting the chequered flag for a victory lap.  The other two races were won by William Hughes and Kylee Symes.

A Demolition Derby completed the nights activities and after nearly fifteen minutes of crashing and bashing, Henry Tongariro was a clear winner and the only car left mobile.  Myles Hughes was awarded the Best Presented prize, Andrew Hook and Joshua Tongariro were judged to be the best stirrers while Steve Reed won the Hard Luck prize.  Demolition Derby competiors had a non contact race ealier in the night also and this was won by Regan Jordan.

Speedway takes a break now for a few weeks.  The next race meeting is on January 15th and will feature the Hinton Contracting Fireworks Spectacular.