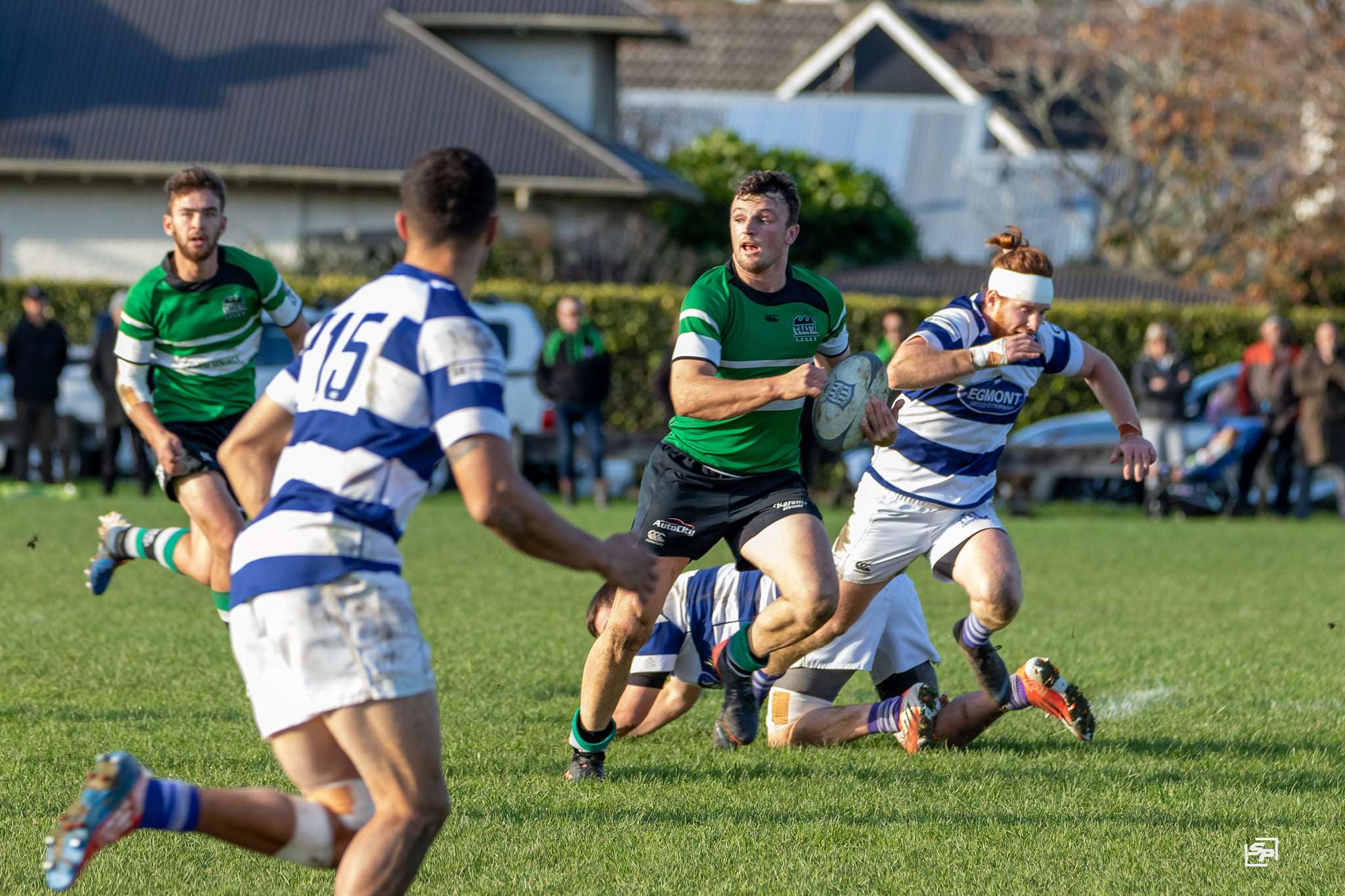 For the third time, Coastal and Inglewood will meet in the final of the CMK-sponsored Taranaki premier club rugby competition.

Both sides had to work hard to advance through their semi-finals on Saturday, with Coastal scoring in the 80th minute to pip Tukapa 13-12 at Sanders Park. Inglewood broke free in the last nine minutes of its clash with Stratford/Eltham to prevail 27-11 at the TET Stadium.

The final will take place at Inglewood this coming Saturday and will be a repeat of the 2009 (won by Coastal) and 2014 (won by Inglewood) deciders, which were also between the two clubs.

Coastal’s victory was the most dramatic, with wing Troy Stevenson (pictured) the ultimate hero when he crossed the line to score with time up. It was a case of déjà vu for both sides, with Coastal having also beaten Tukapa with a try in injury time the previous week.

As befitting a semi-final, the game was close and tense throughout. Both sides experienced lineout wobbles and Tukapa will still be rueing the one they lost in the 79th minute.

It seemed inevitable that the towering figure of Leighton Price would be used at the front. But instead, Ricky Riccitelli threw deeper and Coastal captain-fantastic Jeremy Newell, who was a commanding performer, stole the ball.

Coastal patiently moved the ball through the forwards, before it was spun wide. From the resulting ruck, the impressive Logan Crowley got the ball out to Stevenson who scored in the tackle.

Jackson Sinclair’s conversion missed, but that was academic as Mitch Young blew no-side.

Tukapa had opened the scoring with a Riccitelli try and Mason Porteous conversion. It followed a Price lineout win and subsequent drive. In the final analysis, it also provided a remarkable irony.

Coastal’s forwards held a clear edge in the scrum. It was from that platform that Newell was able to score Coastal’s first try in the 16th minute.

Rick McKenna, who played his 150th match for the club, put Coastal in front after 33 minutes with a penalty.

Tukapa regained the lead after 54 minutes, when a perfectly timed Mike Nyssen run set up Liam Ward to score.

Coastal dominated territory in the last quarter, with Tukapa unable to clear satisfactorily, another contributing factor to Stevenson’s thrilling conclusion.

At Inglewood, the home side had a clear case of the “dropsies” in the first half. But the top seeds still managed to lead 8-3 at the interval.

From a lineout, good runs from both Mills Sanerivi and Lisati Milo-Harris, put Josh Jacomb over for a try. Jacomb added a penalty from a wide-angle in the last act of the half.

Inglewood enjoyed more of the play in the second half. Captain Jonny Faletagoai-Malase was held up over the line. But there was reward soon after when the ball was transferred along the chain to Steven Snoxell to score.

A second Olsen penalty, after 58 minutes, brought the visitors back to within one-scoring play. That hope began to look a lot more realistic when an excellent Olsen cross-field kick was collected by Niwa Barlow, who scampered 60m to score. Olsen’s conversion missed, but the game, with 11 minutes remaining, was wide open.

That was until Milo-Harris, by now playing on the wing, received a long pass from Jacomb. Showing great footwork, Milo-Harris beat two defenders on a 25m run to the line. Jacomb added the extras and then a further converted try himself near the end, the inflated score line belying just how competitive Stratford/Eltham were in the game.

Meanwhile, Old Boys and Spotswood United will contest the division one finale after they won their respective semifinals. The other grades will be between Normanby and Kaitake (division two), Coastal and Okaiawa (division three) and Old Boys and Stratford/Eltham (colts).